REFLECTIONS ON THE PAST WEEK AND BEING TRUMPED

I had intended this blog to be the start of a series with the title of a book that I discovered in 2002 just after it was published called 'The Way of the Dream Catcher'. Written by S.T. Georgio, this is his account of spirit lessons with Robert Lax, a minimalist poet and close friend of Thomas Merton. I wanted to focus on this as Lax spent much of his life on the Greek island of Patmos where we escape to as often as we can. I am at the moment working on a series of Patmos inspired pieces of textile art and intended to blog about this too. And then Donald Trump became President of the United States.

I had followed the campaign and was far from impressed by him. I found his attitude to women unacceptable not least the clip shown of him taking about women as fodder for his own lust -  and the stories from those who had been abused. The televised debates were gripping but did not impress. I am not a Hilary Clinton fan but compared to Donald .... However, just as before our UK Brexit vote when I just knew that the results would be Leave I could sense that Donald was somehow going to  achieve the impossible. I understand the degree of alienation that explains why the UK voted for

Brexit. I can see that there are similar factors in America that explain why so many voted for Trump. And I also understand why people are taking to the streets in protest while others are applying to emigrate to Canada, Australia or New Zealand. At their age, I would be doing the same.

'The Dream Catcher' has relevance to these reflections on the past weeks. The dream catcher as a physical artefact saves good dreams as they pass through the hole in the centre of the web. Bad dreams are caught in the web. The good dreams will flow down the feathers to the person dreaming while the bad dreams dissolve in the daylight. Dream catchers are embedded in Native American culture. I was given one as a present by a friend who had visited the USA. Sadly it was lost in our house move.We need good dreams - to dream well. I hope those in despair in the States can find good dreams in time.

When I think of Donald Trump I also am reminded of Lisa Simpson. There was a time when the Simpsons were on UK television at 18.30 weekdays and I made a point of watching.

Lisa has been described as the moral centre of the Simpson family. She takes a liberal stance and advocates various causes - the Tibetan Independence Movement for instance. And to the delight of  someone living in Cornwall - Cornish Nationalism and the Cornish Language! There was a wonderful moment when Bart saw into the future with Lisa as the first female President who has inherited "quite a budget crunch from President Trump!" I have since discovered a wonderful clip on You Tube where the grown up Lisa as the first female President having followed Donald Trump nails his presidency as the time of "Increased Debt"! A prophetic view of the post Trump future?

Today we do not fully understand or know where his presidency will take the USA or the impact on the world. There are those who are delighted, those who are frightened and a probably small number who are indifferent. I am reminded of the ancient curse "May you live in interesting times". I am today more concerned - and worried -  about the world I am living in than ever before. I see the migrants escaping from the horrors of their lives and not always finding a warm welcome and know that I am lucky but I feel helpless in that I can not help them. With Donald Trump as President of the most powerful nation in the world and able to command the military ...

Then I remember Victor Frankl a Holocaust survivor. His best selling book is 'Man's Search for Meaning'. His time in a concentration camp during World War 11 and the loss of most of his family led him to discover the importance of finding meaning in all forms of existence, even brutal ones. He concluded that even in the most dehumanised situation life has potential meaning. 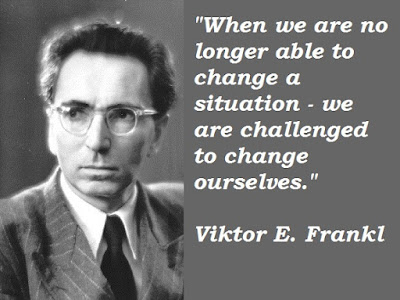 Another quote: "Everything can be taken from a man but one living thing: the last of human freedoms - to choose one's attitude in any given set of circumstances, to choose one's own way."

So in the UK and the USA today there will be many deciding how they should respond. I find myself at times angry - which is good but anger needs to be channelled appropriately. For some that will be marching, for some letter writing, petition signing - and some will only have the energy in these days of hardship, to keep their head down and soldier on. Robert Redford at the end of the film The Candidate when he found he had won the presidency said something like "What do we do now?" There's a lot of people asking that question right now, Trump included.

So I end with the words of Robert Lax who I will return to in another blog - "It may help to keep in mind three things: there's God, you, and the moment - and every moment is like a gift." This makes sense to me. I have in the past been an attender at Quaker Meetings and learnt the Quaker saying: "May that of God in you reach out to that of God in others." That's something I need to keep remembering.