Since January 2013 and our move to St Ives from East Anglia I have been the St Ives branch of the Norwich City supporters club (unofficially).  Supporting Norwich is never boring. There is the constant concern about Ipswich, the local rivals - might they end up higher in the Championship, even gain promotion into the Premiership? (All is well at present - we are 2nd and they are nowhere.) I do not envy the police at the East Anglian Derbys!

I have been married to a Manchester United supporter for over 40 years. So my original interest in football was Man U - especially during Cantona's short reign. However the take over by the Glazers and my contact with Norwich City while working as an Open University Advisor in Norwich have changed all that. However if anyone wants to watch a great Ken Loach film I can highly recommend Looking for Cantona - Eric makes a magic appearance in it. 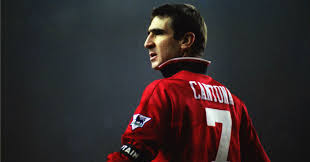 Eric wearing the number 7 shirt he made his own.


The Education Advisor at Norwich City FC came to see me when I was working as an Open University advisor in Norwich. His job involved helping players achieve qualifications for life post football - not all would be able to achieve  the ambition of managing a team. He thought the option of distance learning with the Open University could be a solution. So followed a spell of Norwich City players coming to see me. One was the captain at that time,
Craig Fleming, now the under 18s coach at Southampton. He retuned for a follow up session for more advice. By then I had learnt from my hairdresser and friend that her 7 year old son was a great Craig fan. When I told Craig this he immediately asked what his name was - the following week he arrived with a signed photo and message for him. At the end of that season in 2004, Norwich were promoted into the Premiership, their first return to the top league since 1995. Nigel Worthington was the coach and he took the team's commitment to their local support very seriously. At a local junior event he and the Norwich FC winning team arrived bearing their cup. My hairdresser's young son was there and introduced himself to Craig, showing him the signed picture. Craig responded warmly and well, raising a seven year old's self esteem and gifting him another, I am sure, never to be forgotten moment. We all need our heroes. 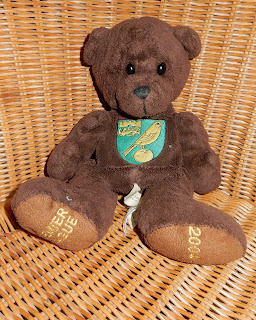 Ed Balls, the former Chancellor of the Exchequer, was born in Norwich and is a strong Norwich City supporter and is now the human Chairman. 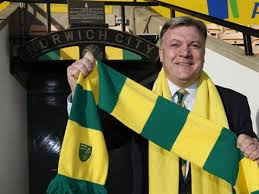 Being an avid election watcher in 2015 I stayed up to watch the General Election results with the sinking feeling that Labour were not going to win.. and then I saw Ed Balls lose his seat. The Norwich City connection had an impact on me as of course the significance for Labour of this loss. I imagined how I would feel in that position with the world watching. So as the St Ives Cornwall Norwich City supporter, I wrote to him saying that I was sorry and that I hoped there would be some consolation in Norwich's return to the Premiership. To my surprise I has a lovely thank you reply.

Then came Strictly! I am a great Strictly Come Dancing Fan as it helps me through the ending of Summer and sets me up for the Xmas feast. I love to hear how insulting Craig is and see Darcey looking askance at him as she softens his criticism. How Bruno is so effervescent and Len so much the head judge. I love the costumes, the dancing, the whole extravaganza ...

Who would ever believe the wonder of Ed the Mask or forget it? 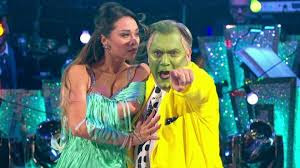 So I emailed him again with support,  hoping that he was still able to watch Norwich's success. And another lovely reply - hopefully between dance practice! There is a life after Parliament.

Sadly Ed does not support Jeremy Corbyn but in the immortal words at the end of the film  Some Like it Hot - "Nobody's perfect"!

And here's hoping that Norwich City return to the Premiership!