The small island of Patmos is one of the most sacred places in the Christian world. A place of bewitching power where people come for a brief summer visit and end up returning year after year - as we have. We've travelled there by various routes. The first time via Kos and Kalymnos on small ferry boats. Then during the 90s via Samos, again on small ferry boats that looked ready for retirement. There was one memorable trip when we met a group of young troubadours and jugglers on the quayside who continued to entertain with song, dance and juggling on the boat.

Now a swift modern ferry takes us direct from Piraeus, the port of Athens. But whichever way we


travel, the arrival is always a wondrous moment as we turn into the bay of Scala, the main port of Patmos, and begin to see again the familiar features of what feels like our second home. 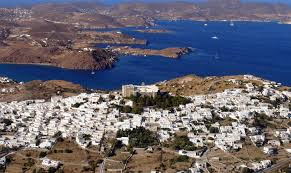 An ariel view of Patmos

Patmos has a special meaning for many people. In 'A Place of Healing for the Soul', Peter France recounts how he first arrived on the island as a skeptic and soon found his life perspective changing. He learnt from the island's inhabitants - not least its religious eccentrics: hermits, ascetics, monks and nuns. He discovered the pleasure of living simply and doing without in a place where mystery, myth and magic are alive. 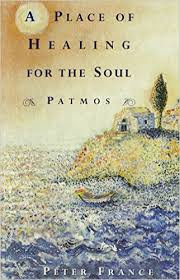 His other book which has inspired me is 'Hermits'. It provided important material to support my argument in 'A Psychoanalytic Critique of Eccentricity', my Masters' dissertation. In this inspiring book Peter France explores the history of hermits and the truths they found in solitude. It includes engaing accounts of the lives of famous hermits such as Thoreau, Thomas Merton and the American poet Robert Lax, who also lived on Patmos and who France met there. 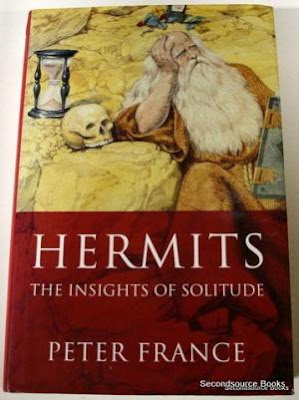 I tend not to have regrets. On balance, they tend to be a waste of time. I feel that things happen when I am ready and open for them. But I will acknowledge a couple of small regrets.

The first regret happened when we were walking back to Scala from Agriolivado beach one afternoon in the nineties. A couple pulled up beside us in an old navy-coloured open jeep with a UK number plate and offered us a lift. From time to time people do offer us lifts and, as usual, we declined explaining that we like to walk. Soon after they drove past I realised that the man and woman had been Peter France and his wife ...

The other regret is that I saw without knowing Robert Lax. During the late 80s and the 90s I was aware of a singular and striking elderly man who walked along the Scala front, often stopping to talk to ferry men and others who knew him. I just thought that he was a local Patmian. It was only when I read the the book written by S.T. Georgio - 'The Way of the Dream Catcher: Spirit Lessons with Robert Lax' - that it dawned on me who this figure had been. None other than Robert Lax, minimalist poet and close friend of Thomas Merton. Reading Georgio, I came to know Lax - indeed a blessing. I had encountered a spirit guide.

This year, on Patmos, we were gifted the chance of meeting Nico and Ritsa Eliou, artists and potters who live in Kambos. We spent a magic time with them on the porch of their Kambos pottery overlooking the sea, listening to their stories of their friends: the late Robert Lax and Peter France and his wife, Anna. It was another way of knowing these figures, glimpsed in person but never fully met. And we have a permanent reminder of this day - and of Nico and Ritsa - in the form of Ritsa's beautiful pottery which is in daily use and very treasured!


This has been a prelude. What follows will be reports on my Patmos project - textile art inspired by the island and the people we meet there.