CLEMENT ATTLEE AND A BLONDE OPPORTUNIST - LIVING IN INTERESTING TIMES

On 23rd July 2019 Boris Johnson was chosen by the Conservative Party as their new leader and so became the Prime Minister of the UK.

This is not an event which produced joy for many, certainly not for me and it left me thinking about a Prime Minister I have long admired - Clement Attlee. 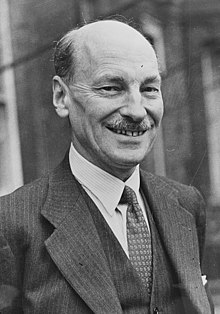 Clement Attlee was the leader of the Labour Party from 1935 to 1955 and Prime Minister from 1945 to 1951.This was the most significant reforming administration of 20th Century Britain. It introduced the National Health Service and nationalised one fifth of the economy.

Attlee had a conventional middle class upbringing and after going to Oxford University began a career as a barrister. He left this to become a social worker in the East End of

London and later joined the Labour Party. He served in the army in World War One. He became the member for Stepney in 1922 and served as a junior minister in the 1924 and 1929 - 1931 MacDonald governments. He was elected party leader in 1935 after many of his rivals had lost their seats in the 1931 election. His quiet personality led many to underestimate him and plots to replace him were a regular occurrence. During World War  Two he was a successful deputy Prime Minister in Churchill's coalition government.


Then in 1945 when Labour swept to power in a landslide election victory, his social conscience and patriotism helped underpin Labour's democratic socialism. His government was responsible for the creation of the National Health Service and the nationalisation of the coal mining and steel industries. He supported both Bevin's Cold War diplomacy and independence for India.

After Labour's defeat in the general election of 1951, Attlee's effectiveness dramatically declined, his authority broken by factional fighting within the party. He resigned as leader in 1955 and accepted a peerage. He died on 8 October 1967.

So much for the outline biography but we know a man by his words and I have been shaped by these. Here are a couple of the Attlee quotes I value:

"Charity is a cold grey loveless thing. If a rich man wants to help the poor, he should pay his taxes gladly, not dole out money at a whim."

I think I know what his views on food banks would have been.

"I believe that the foundation of democratic liberty is a willingness to believe that other people may perhaps be wiser than oneself."

Would Boris Johnson ever express such a  thought?

In 2013, Nicklaus Thomas- Symonds  wrote a biography of Clement Attlee which I borrowed from the library and was gripped by. He finished by saying that while writing this book he was frequently asked if Clement Attlee could become Prime Minister today. To which he replied - "No, there is no way Sir Clement and Lady Attlee would have agreed to be photographed in their sitting room with their children!"

I have every confidence that he would not, before he became Prime Minister, have had the police called by his neighbours to sort out a row between him and the latest love in his life - and within a few days ensure the publication of a photograph of the two of them in a carefully staged picnic in an idyllic setting!

Clement Attlee was a man of compassion and integrity and humanity. I salute him.


The gamester with the blonde hair is a British narcissist, lacking all such virtues.

Jeremy Corbyn never deals out personal insults. I salute him.


I don't bear Jeremy's responsibilities. So I can say I loathe this Tory opportunist who has wormed his way up the greasy pole - and can't wait for hubris - and his Fall!