The third of the transforming events in this journey came in the aftermath of the Bosnian wars from 1992-5. This German publication was published in 1999 and shows the work, pieced and quilted, of a group of  Bosnian women who had fled the horrors and found sanctuary in Austria.

There, in the Galina refuge hostel in Vorarlberg – a disused army barracks - they were offered sanctuary from the war, the children were provided with schooling and the women with various activity and help to move forward. As part of this help Lucia Lienhard-Giesinger who was both an abstract artist and psychotherapist was asked to help - possibly with art classes. She thought about this and did not want to be the expert - the teacher. She came up with the idea of quilts - something they could all learn.  She provided the templates, inspired by abstract art, to make the quilts and then the women were encouraged to quilt as freely as they wished, expressing their own individual identity and worth. A group of about 30 women were part of this healing work. 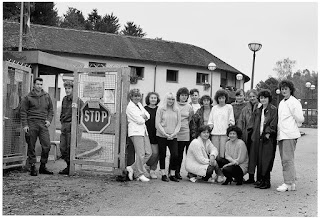 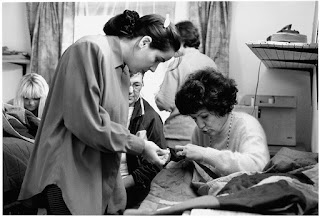 For generations, women in varying cultures have gathered together to quilt and talk and reflect. Lucia knew that the activity of quilting would also need concentration. She has said: ‘Sometimes it is necessary to repress the memories’. What she did not anticipate was that these unique quilts they were making would enable some of these women to return to their homes and earn a regular income. After the war, eleven women retuned to Gorazde, about 50 kilometres from Sarajevo, and set up in business. Lucia designed the colour schemes; the women provided the quilting.

They work when the weather is fine on the banks of the Drina river. The finished quilts retail at around 1000 euros and find their way into homes and churches and museums and galleries in cities such as Vienna, Zurich, and Gothenberg. 80 quilts are sold each year. They even now have their own permanent exhibition space in Bregenz and have exhibited widely in Europe – sadly I missed their exhibition at the NEC Festival of Quilts. 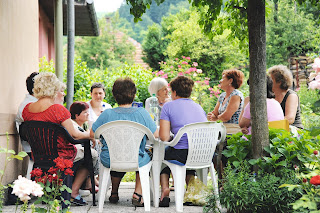 The artistry of these women was recognised in the international quilting community and I became aware of what they were achieving through the quilting magazines I was reading. What is amazing about these quilts, apart from their story, is that there is no Bosnian nor any other regional textile art tradition to provide a foundation for their work.

Lucia Lienhard-Giesinger has also been shaped by this quilting story. Here are the words of her husband:
‘She has changed - my wife; mother of three. When she became part of the lives of the Bosnian women, how could she have known that these women’s melancholy and stoic composure would become familiar traits to her and have a lasting effect on her life and work. In a word, while Bosnia was being reborn anew out of violence, misery and displacement, a new Lucia was emerging. She has learnt that it is good not to work alone. And art has emerged from the hardships experienced by a nation. 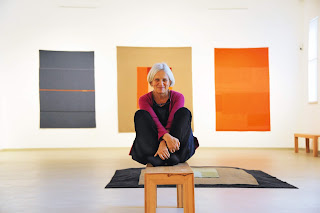 I bought my Bosna Quilts book with a book token present late in 2008. However, it is only now that their work is having an impact on what I am creating. I should also add that It was around the end of that first decade of the new century that I listened as a therapist to a police client reliving the horror of what he had witnessed as a British soldier with the helpless United Nations forces in Bosnia confronted with the greatest ethnic cleansing since the Second World War. Bosnia became personal at that point

A final thought
When I reflect on the history of my work I can see the connection with myself as the child. I have a very strong memory of a Sunday lunch with my grandparents and parents having a conversation I was listening to – what about I do not remember - but I suddenly interrupted with the statement “BUT PEOPLE MATTER!” which produced laughter. When I reflect on my working life and on what I am doing now I still think that the child who claimed that people matter is there in me as an adult - and I hope this belief is reflected in all I create.

So where next? I am aware that my current projects are still being influenced by Amish colours and simplicity -  but there is also for the first time a Bosna Quilts influence as well. The journey of discovery continues.
Posted by Louise Donovan at 16:24