A trip to Bath and a Jane Austen feast ..

I have just returned from a wonderful three days in Bath. I walked miles, the sun shone and I had a great Jane Austen feast!

I love Jane Austen novels and have read them all so many times. They have always been turned to when I need to recover from exams, illness .. and while Jane writes of a life that is not quite like today the dreams, the fears, the idiocies are all the same. She portrays human nature so well.

I have in the past visited the Jane Austen Centre in Gay Street and enjoyed it. So another visit was at the top of my list and it did not disappoint. This time all the staff wore Regency dress and acted as far as they could as ladies from the Regency days. At the door you were welcomed by a gentleman who was also in Regency dress and in role of the doorman - a family retainer. 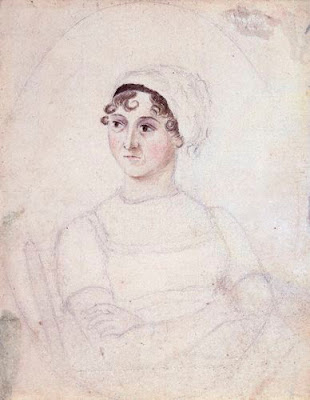 The visit starts in a room on the first floor where you are invited to an introductory talk. We were gifted a lovely young lady who was really knowledgeable and gave Jane's history and story so well, fitting it in with the history of her time as appropriate. And there was a focus on Jane's life in Bath, first as the daughter of a clergyman and then later when life was harder and she, her sister and mother had to move as the money ran out. They ended up in Trim Street, the bottom of the social scale where their neighbours were prostitutes, pimps, beggars and thieves. This talk was also focused on the part

Bath played in her novels, especially Northanger Abbey and Persuasion. However the city is mentioned in every one of her works. Then our lovely guide took us on a tour. We started in a gallery where there were representations of Jane including one her sister Cassandra drew. Our guide brought out how this had enabled "experts" to work out what she looked like. There is a  model of her in the final room of the tour where if you wish you can dress up in Regency costume. And there are photographs from the films and televising of her books to walk past on your way out. The booklet you get as part of this give a wonderful map and details of a Regency Tour of Bath - which I also followed with pleasure.

I went to the Museum of Fashion which is located in the building where the Assembly Rooms are. There is a feeling of going back in time along with recognising the clothes from the television and film adaptions of her novels. When I was on my own in one of the rooms I would not have been surprised if a being from Jane's day had come in. 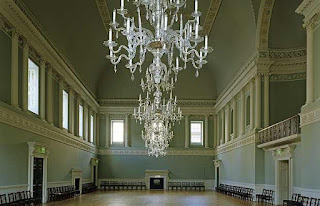 The walk around Regency Bath is impressive and  again it is possible to block out the present day and imagine yourself back in time. If you look carefully at these houses you notice that the homes built for the family and their servants with private areas and entertaining areas are too vast for the modern family  today - so few remain as a home for one. Some have been turned into two homes and others into flats. I stayed in one of these houses which is now a B & B with all the original features combined with modern comforts.

At the start of the famous Royal Crescent is No.1 which is open to the public and worth a visit. Each room has been restored to full Regency decoration and style with a helpful guide who reported on how this room was used, the life of the occupants and their guests. Their knowledge was impressive and certainly added to one's understanding of Regency life - both above and below stairs!

My favourite part of my Jane feast was as I left the Jane Austen Centre. I was again greeted by the man in the role of the family servant who would have met and greeted the guests. He enquired in Regency style if I had enjoyed my visit. I enquired if he had had a break and some lunch or had he been on duty with no break - I had been there for some time! He stayed in role as the devoted and conscientious family retainer. So I concluded by telling him that while this would not help him now there would some years in the future be trade unions who would fight for his rights to lunch breaks, paid holidays, a fair wage .. he laughed! Perhaps with understanding of the reduced power of trade unions?

Jane Austen's day may be too easy to romanticise - it was not great for all.
Posted by Louise Donovan at 10:23