HOPE AND DESPAIR - MY PATMOS PROJECT AND DONALD TRUMP

My Patmos Project progresses. Hora by Night is finished ... 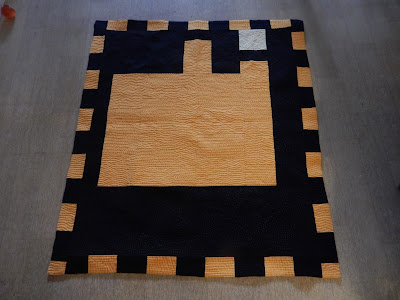 and Hora by Day progresses ... 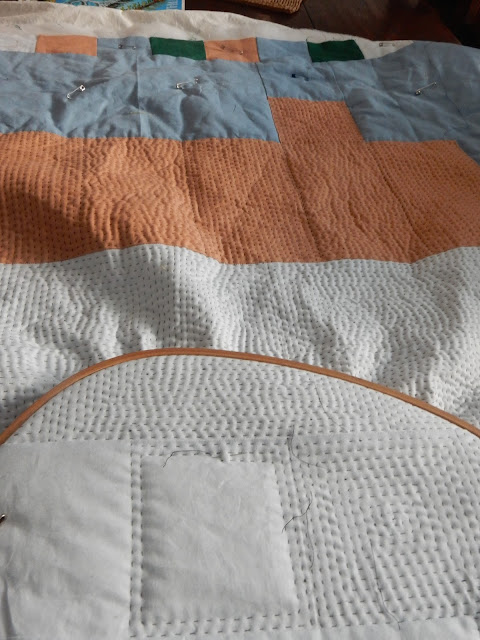 But there has been a bureaucratic delay.  This is due to the need to make phone calls to Patmos about the application forms for the exhibition in the Cultural Centre. It is a very strange speaking to someone over the phone who lives and works on this wonderful Island. It would help no end if I had learnt to speak Greek and I am

keeping fingers crossed that there is successful communication when Rob engages with the next phone call with his knowledge of the Greek alphabet!  I think that from St Ives, Cornwall I am speaking to someone in this building shown below. Note the Italianate architecture, a visual reminder of times of occupation. 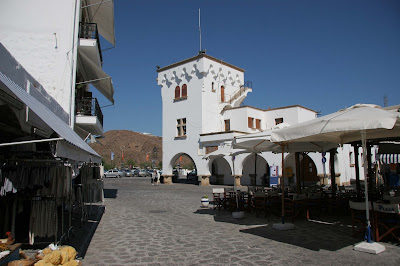 
It is so familiar. We have often sipped a Nesfrappe in the shade of the cafe.

Patmos then represents Hope. No prizes for guessing who represents Despair in my world view. An official body for psychoanalysts came to a judgement some time ago that their members must refrain from making and expressing professional assessments on public figures who have not been on their couch, so to speak. This convention is under severe strain. I have noted several acknowledging they have made no clinical diagnosis - but then affirming a Narcissist is now the President of the United States of America.

In this Post-Truth era, I have no hesitation in adding my thoughts. We need facts. We need truth.

Narcissus was a hunter from Thespiae in Boeotia who was known for his beauty. He was the son of the river god Cephissus and nymph Liriope. He was proud, in that he disdained those who loved him. Nemesis noticed this behavior and attracted Narcissus to a pool. When the arrogant hunter saw his own reflection in the water, he fell in love with it, not realizing it was merely an image. Unable to leave the beauty of his reflection, Narcissus lost his will to live. He stared at his reflection until he died. Narcissus is the origin of the term narcissism, a fixation with oneself and one's physical appearance.

Anyone who’s dealt with a narcissist knows you never, ever, believe what they say—because they will adapt for their own benefit whatever they are saying to their audience. Donald Trump is a master at phrasing things so that multiple listeners will be able to hear exactly what they want. This is overt deception. Narcissists are a danger to others because they are in complete denial of reality.

One of the key presenting traits of narcissists is their utter inability to empathise. This can manifest itself in a variety of ways:

• Ignoring requests to cease behavior (such as cheating and lying)
• Name calling, criticizing, belittling, mean “jokes”, jabs and put downs (verbal abuse)
• Arguments surrounding the same issues over and over
• Turning around a partner’s concerns to blame him/her and block the conversation
• No closure - no apologies, no accountability, no consequences, no change
• Narcissists are capable of inflicting physical and psychological harm on others and are unmoved by the plight of those they hurt

I am not a psychiatrist, although I do have a Master's in Psychoanalytical Studies and a quarter-century of experience as a psychotherapist. But from that description above of presenting traits, Mr. Trump would be diagnosed as having Narcissistic Personality Disorder.

Hands up if you agree that such a mental disorder should disqualify a candidate from becoming president of the United States of America. Should any person be voted into office when there is prior knowledge that she/he has cognition impairment, abysmal interpersonal skills, or impulsivity? It seems to me that such a combination of mental malfunction will prove to be lethal, set the country on a course to ruin, and all with potentially horrendous implications for the rest of the world.

The pictures of him dancing with Melania at the Inaugural Ball fascinated me. He seemed to me to be staring out and completely unaware of her - where was the shared delighted?

How different is the picture of  the Obamas at their Inaugural dance.

And the response of the Prime Minister of the United Kingdom? She became the first world leader to visit him. This has lowered my extremely low opinion of her even further! I was angry when Margaret Thatcher sank the Belgrano. I was furious when Blair took us to war in Iraq. Today with Donald Trump President of the United States of America I am livid with May. But more scared than I have ever been before. 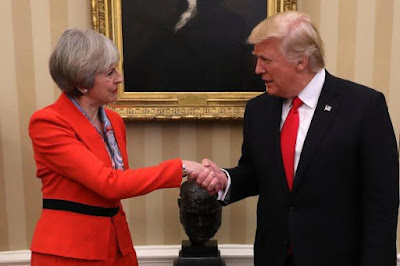 And Laura Kuenssberg of the BBC did what I had hoped Theresa May would do - challenged him!

"Mr President, you've said before that torture works, you've praised Russia, you've said you want to ban some Muslims from coming to America, you've suggested there should be punishment for abortion.
For many people in Britain those sound like alarming beliefs. What do you say to our viewers at home who are worried about some of your views and worried about you becoming the leader of the free world?"

And she concluded her report on Theresa May's visit with these words:

"Like the rest of us, politicians are sometimes judged by the company they keep."