WE BECOME WHAT WE DREAM

The first time I started to think about this subject was many years ago when I overheard two fathers talking. One had young school age children and he asked the father whose children were all now grown up and away from home a question.

"If one of your children had a dream you thought they could never achieve what would you advise?"

I immediately butted in:

Neither of them paid any attention to me and they continued seamlessly with their very grown up discussion on the subject. Their agreed conclusion was that the parent had a duty to protect his or her child from the likely consequences of an immature and ill-judged ambition.

It is not that I don't understand the desire to protect from hurt and disappointment but it left me thoughtful. How do we know what someone else's journey through life should and needs to be? What are these adult rights and wisdom that can legitimately trump the rights of the youngster to explore his or her own meaning and destiny in life? We can not offer total protection from disappointment but we can be there to listen to the pain. We can show how we cope with loss and hurt - and give the message that disappointment will not destroy and there are people around to care and help.

I was able - in the end - to follow my dreams and am fortunate. They have mostly worked out. The purpose of my life - anyone's life - is to grow emotionally, psychologically and spiritually and my way has been to follow my dreams. There is risk. I might have followed a dream and then found it had all been a waste of time. I might have had to make sense of a major disappointment, deal with a sense of unfairness. But those set-backs would all have been part of my life journey, enabling my growth - a growth that I hope continues until the end of my days.

One Christmas in the early1990s I watched a film called Salt Water Moose - I even recorded it and was so moved that I suggested that Rob should watch it. At the end he asked how many stars the Radio Times had given it to which I replied - one. His comment was "That many!" He can be grumpy. And fair play, on our fourth viewing together, he had reached four stars!

It is a lovely gentle story of two children, Jo and Bobby, living in Nova Scotia. There is one moose living alone on a small island out in the bay and they want to find another moose, build a raft and take it to join the single moose.

Bobby's mother is concerned about the danger and she attempts to get Jo's Dad to join her in stopping them. His response is to say "I am not the one to say 'No, its too difficult for the likes of you'. There's plenty enough people in the world to tell her that. But what I will do is to make sure that the raft is sea worthy and keep an eye on them."

Jo and Bobby find a lovely moose they call Beatrice and after some set backs and a bumpy journey succeed in taking her over to the island to join the other moose. Such films operate at many levels - for me this is a cinematic exploration of the psychic importance of growing well and being encouraged to follow a dream and manage risks.

When I was at teacher training college I visited Summerhill School in Suffolk where lessons are not compulsory, the children are trusted, there is a belief that play is the most important thing they will do and there needs to be time made for it, that children have rights and are not owned by teachers or parents and that when they are ready to learn they "go like rockets ...' There is a film that tells the story of an OFSTED inspection at Summerhill. In one scene, an inspector watches one child sitting alone in silence, appearing to be doing nothing - the inspector is not impressed. The child says afterwards: "How do they know what I was thinking? - I was working out who I want to be."

The film provides a wonderful account of their battle with OFSTED who wanted to close Summerhill down - they were TBW, on the To Be Watched list! And the school won! There is an impressive scene in the film where they demonstrate their maturity during one of the school meetings to make a final decision whether to accept defeat or fight on. They dreamt - and they won. And I love the improbable fabrication of one of the OFSTED inspectors resigning and joining the Summerhill teaching staff!

www.summerhillschool.co.uk The BBC film is there in four parts and worth a watch.

I did many years ago watch a programme which made contact with some ex-Summerhill pupils and found what they had done with their lives. All came across as rounded and happy individuals  in a variety of jobs - some were sending their children there. None had become politicians or OFSTED inspectors so far!


The story which inspired the title of this blog is that of Grey Owl. I have watched the film of his life in which Grey Owl was played by Pierce Brosnen and he looks remarkably like the real Grey Owl. 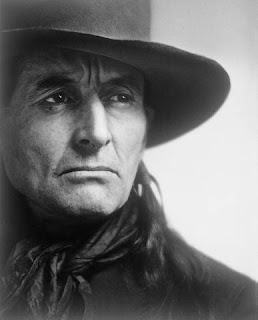 Richard and David Attenborough when young boys had attended one of Grey Owl's lectures when he visited the UK. Grey Owl had been a trapper living in Canada, killing animals for their pelts until his love for a woman and her love for two beavers brought about a change. He then crusaded to save the species and to preserve the Canadian wilderness. He became the most feted "Red Indian" of the day. He came to England, gave lectures and was invited to Buckingham Palace. He had become one of the first environmentalists warning of the dangers ahead. Richard Attenborough described him as "a show man; he had a stage presence which was phenomenal."

But not all was as it seemed. His real name was Archie Stansfield Belaney. He had been born in Hastings and brought up by his two maiden aunts. During his childhood he had been fascinated with the Wild West and Red Indians. After Grey Owl had been exposed, the Attenboroughs' mother said "His identity does not matter a damn. The only important thing is what he came to tell us."

I love the way the film ends. During his time in Canada he gains the admiration of an Indian Chief - this good opinion matters to Grey Owl. When he sees the Chief again after the story of his exposure has broken,  he fears his response. The Chief looks straight at him and says: 'Men become what they dream. You dreamt well"


I have written this just after dispatching 'Any Dream' for exhibition at the Festival of Quilts, hoping that I have dreamt well! And also just after hearing the sad news of the unexpected death of Jennifer, the friend who has been part of my life longest and whom I will miss very much. My thoughts are with her lovely large family and as I make sense of loss through my textile art there will in time be a piece of work in her memory and a telling of her inspiring story on my website.